Home Events Diary A whisper in your ear – Family Festival

Start the All Saints school holidays with family shows, game courses and workshops.
A programme full of emotion, fun, learning and creation!

At the heart of an arena, an acrobat will take us on a joyful and unsettling trip through oddness. This show with no words, where only bodies speak, places us nose to nose with the raw energy of beasts. It’s a vibrant ode to vivid imagination, which questions the notions of freedom, transformation and transgression, whether we are six years of age or older.
Like a fairground animal tamer, Hichem Chérif exhibits the animals which live inside him. Without masks or other artifices, he alters nature and becomes four-legged, a bird, a primate. The acrobat doesn’t actually mimic the animal, but through certain postures, looks, or realistic leaps, he imposes its presence or spirit.
This bestiary, full of humour, revitalises the imagination and opens up to possible stories. When we look into it more closely, we can see a marvellous tale where the hero is a victim of bewitchment, a fantastic fable with a creature which is half-man, half-beast, a humourous adventure or a trance of initiation, or perhaps the dream of a young man who lets go of the bridle of his personal demons. Or is it part of a game where we become freer?

Production BAL Company. Coproduction : Les 2 Scènes – Besançon National Stage
La Madeleine, a Troyes stage of national interest under contract. With the support of the Doubs Département and the City of Besançon.
BAL Company is under contract with the Ministry of Culture – DRAC Bourgogne-Franche Comté.

M A R Y S E invites you to a concert-experience in six chapters, retracing a child’s development in reverse, from childhood back to life in the uterus. Using a universal language – beyond any organic perception or conciousness, it offers a crossing of Mount Batulao and its metaphors: a concert-experience where you are able to feel, walk on and contemplate Batulao, the chemistry between batô the stone and ilaw the light. Its shape is lined with wrinkles dug by torrents, its paralysing burning tears, its contour lines shaped and deformed by our steps. Carved by peoples, by fauna and flora, by the footprint of our times, the mountain is alive for those who allow themselves to dream.

An eternal child, a celestial clown, a draught of air and spirit, the hero of this solo is an angel who crashes on to the stage. With his beetle-green coat and his dusty top hat, he unfolds a makeshift cabaret, a downpour of materials and boxes. We have to say that the body of this weird creature is like a plucked chicken or a dancer on the way back from Las Vegas.
Liberated from the weight of the adult world, the Naughty Angel is a set of metaphysical, child-sized antics. Our whimsical winged character is at home amongst children. When he can’t remember what he came to say, he plays, invents, falls and grows… but without a fuss. His journey, populated with dreams and freedom, breathes the need for love and humour.

A flake in my throat

Constance Larrieu has taken the story of Marie-Pascale Dubé, a Franco-Quebec actress and singer, and invented a joyful and dreamlike vocal road trip which celebrates the powers of our voice – an astounding means of expression of our feelings, our understanding of ourselves and our openness to others. Marie-Pascale Dubé plays herself on set, accompanied by David Bichindaritz, a multi-instrumentalist musician who composes a soundtrack live. Her voice is everything at the same time, carrying characters whose identities are gradually revealed, carrying landscapes which emerge from the evocative power of sound of which only she has the secret, and carrying a story which tells us how the voice can help each and everyone to grow, to develop, to find their own strength…

The Jabberwock Company is carried by the Centre Val-de-Loire Region and receives support from the City of Tours, the Departement Council of Indre-et-Loire, and from the Ministry of Culture (DRAC Centre-Val de Loire). 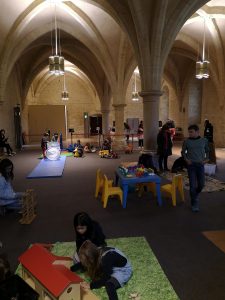 To provide the opportunity to play, to share the pleasure of games for all and at every age, these are the goals of the ARPPE Mikado games library dedicated area.
In encouraging play, games libraries help children to grow and help parents to have privileged time with their kids. Conviviality, education, socialisation and pleasure are part of the game library leaders’ daily life.
From 0 to 99 years of age and more, throughout the weekend, come and take advantage of spaces for babies and toddlers, construction games, assembly and motor function games, rule and board games for children, teenagers and adults, giant games made out of wood, strategy games…

Workshop open to all audiences from age 7  / Duration 2h

Using the workshop’s mixing consoles, you will be able to play with your own, your neighbour’s… or other participants’ voices. Record the created sounds, deform them, associate them to compose a little musical piece which could be melodious, funny or strange…, but, in any case, original!

All audiences from age 3

To the rhythm of children’s feet, the daily life of the monks is revealed with games and sensoral experiences: voice exercises under the vaults, observation games; , puzzles, “touch and find”.

A snack will be offered to children on Saturday and Sunday afternoon.

7 € Reduced rate and under 12s for workshop

Mornings at the Abbey – September 25th

Mornings at the Abbey – October 9th

Cookies ensure the proper operation of our services. By using these, you accept the use of cookies. Find out more OK